Trains, trains, trains. It's that time once again for the Chicago Botanic Gardens wonderland express. Featuring model trains built around famous landmarks in Chicago, the exhibit is one of the events to go to during winter time in Chi town. 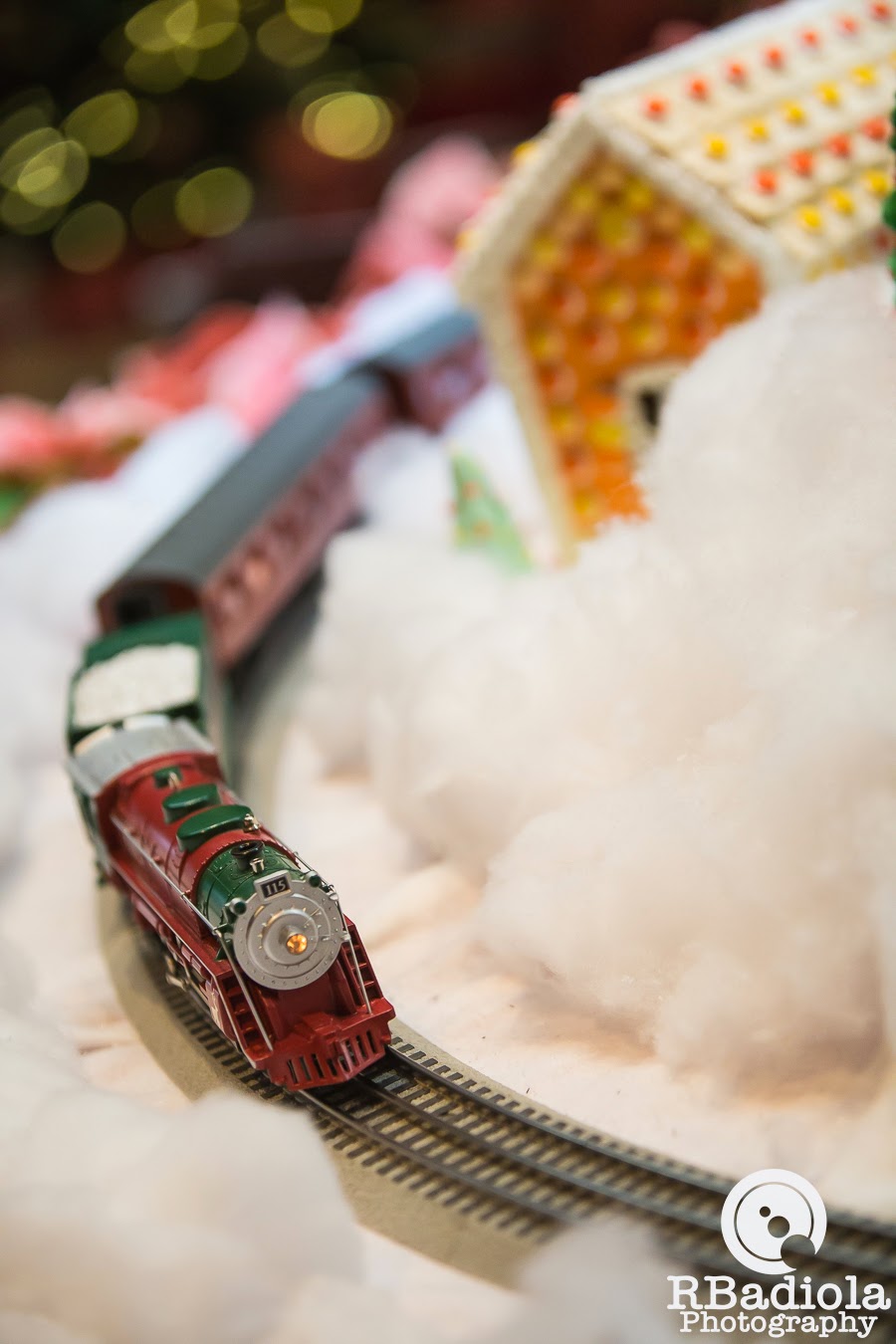 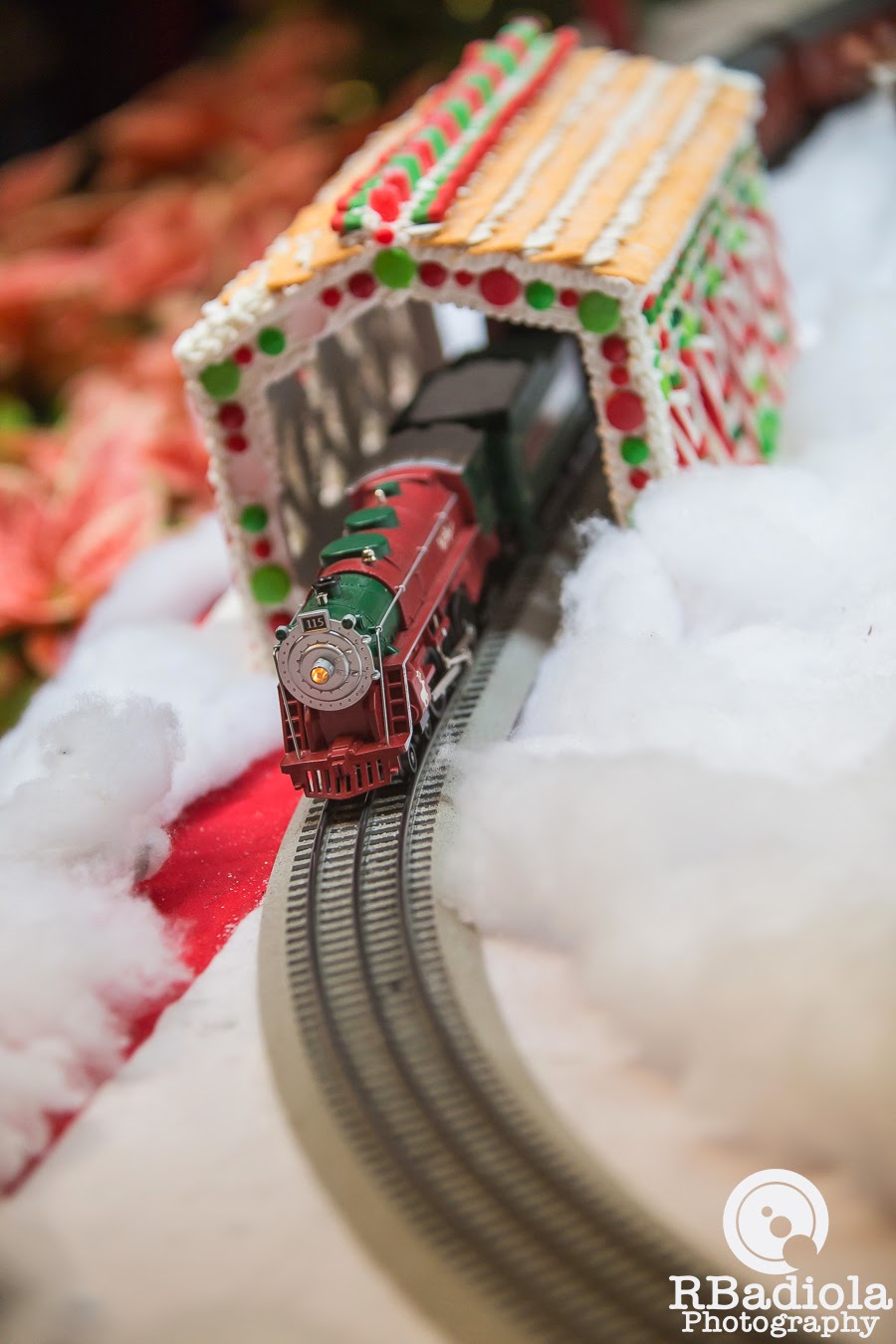 I really do advise people to bring a telephoto lens when bringing in a dslr inside. The dioramas are sometimes too big and some details are only visible from afar. I brought in my Canon 70-200 IS USM f/2.8 lens with me when we went...and yes, you are gonna need that fast, wide open aperture as there is limited lighting inside. 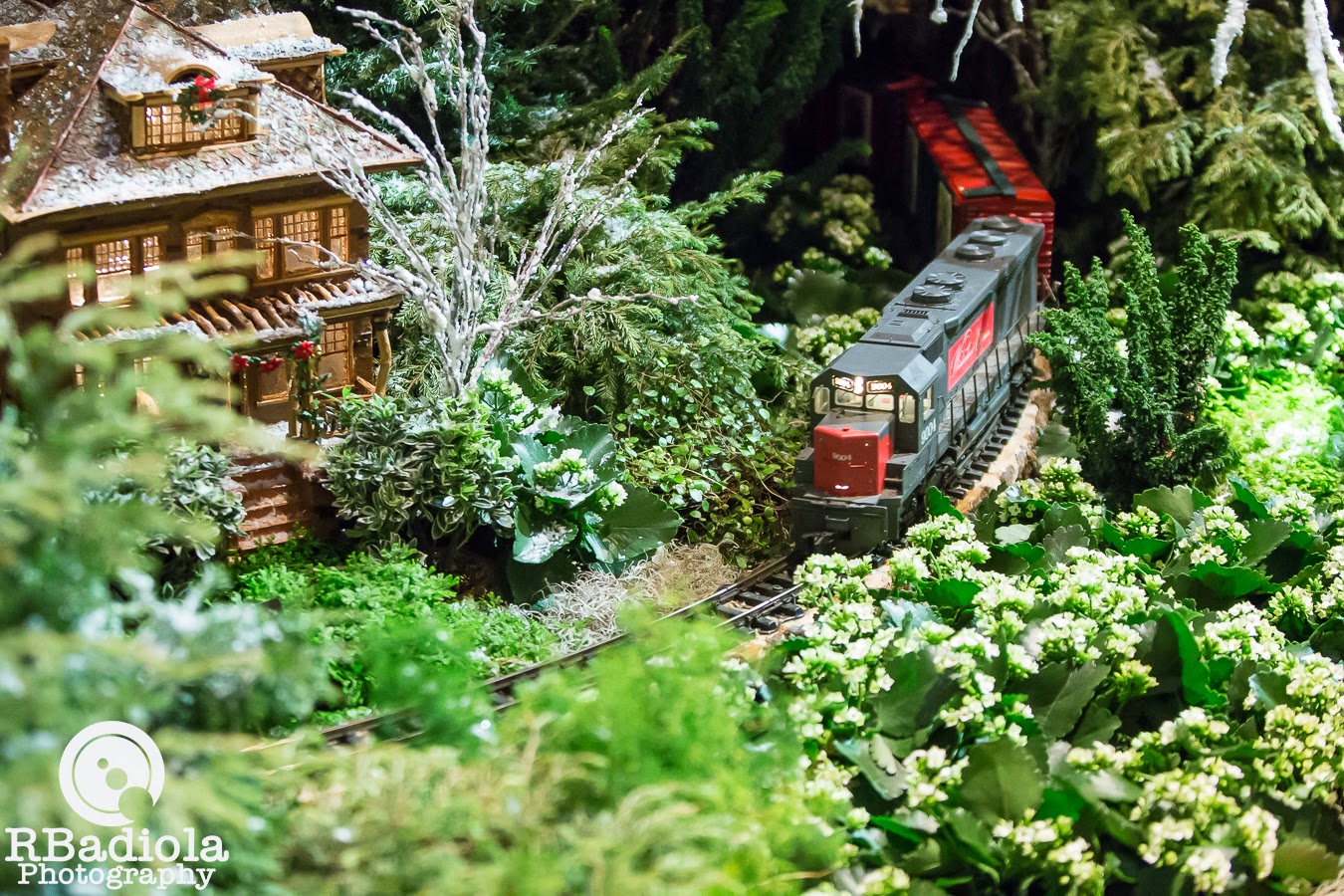 The exhibit is kinda similar to what they had last year. With the addition of some new buildings, it really didn't matter...I still loved looking at every detail I can find in the entire exhibit. 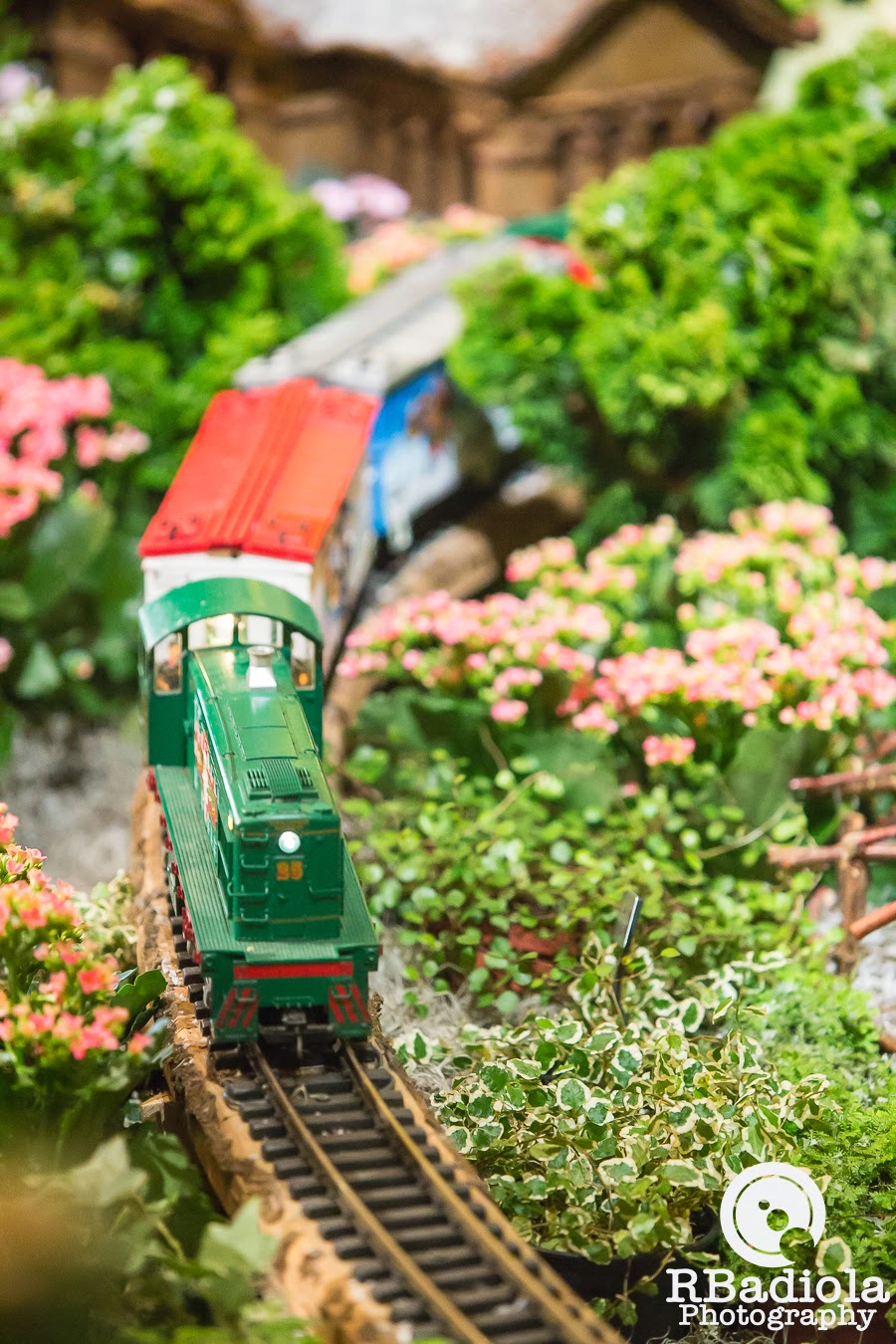 Some trains come by really fast and some of them actually takes a long time to loop around. There were different kinds of trains...from the classic ones to the modern and the odd ones, like a ladybug trolley that went back and forth from one tunnel to another. 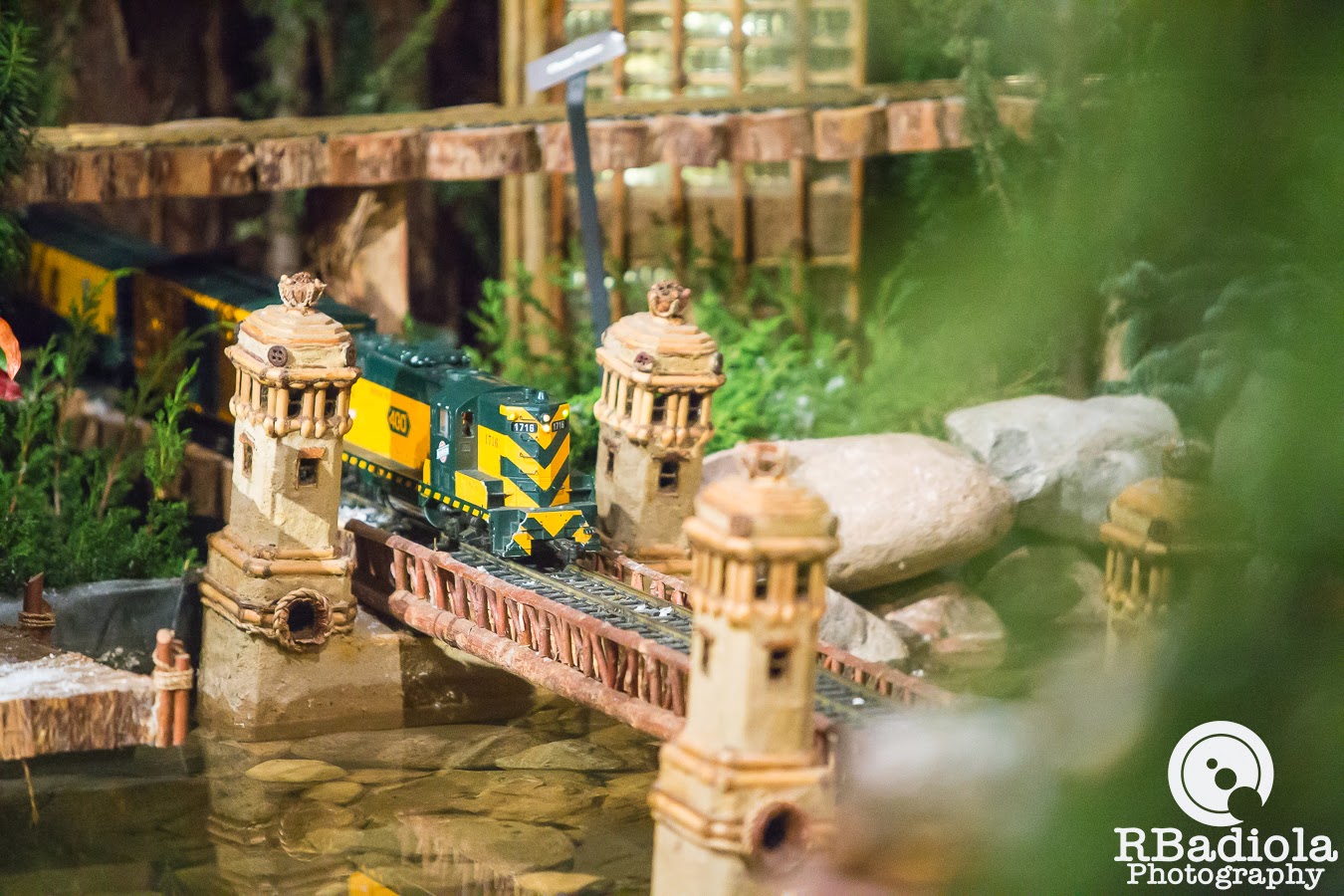 The landmarks are very distinguishable if you are from the Chicagoland area. There's Soldier field, Navy Pier, Evanston National Hospital, The Art Institute and a lot more.


The trains can actually be controlled by people dressed up as engineers walking around. You can sometimes walk up to them and request a particular train to stop in front of you. 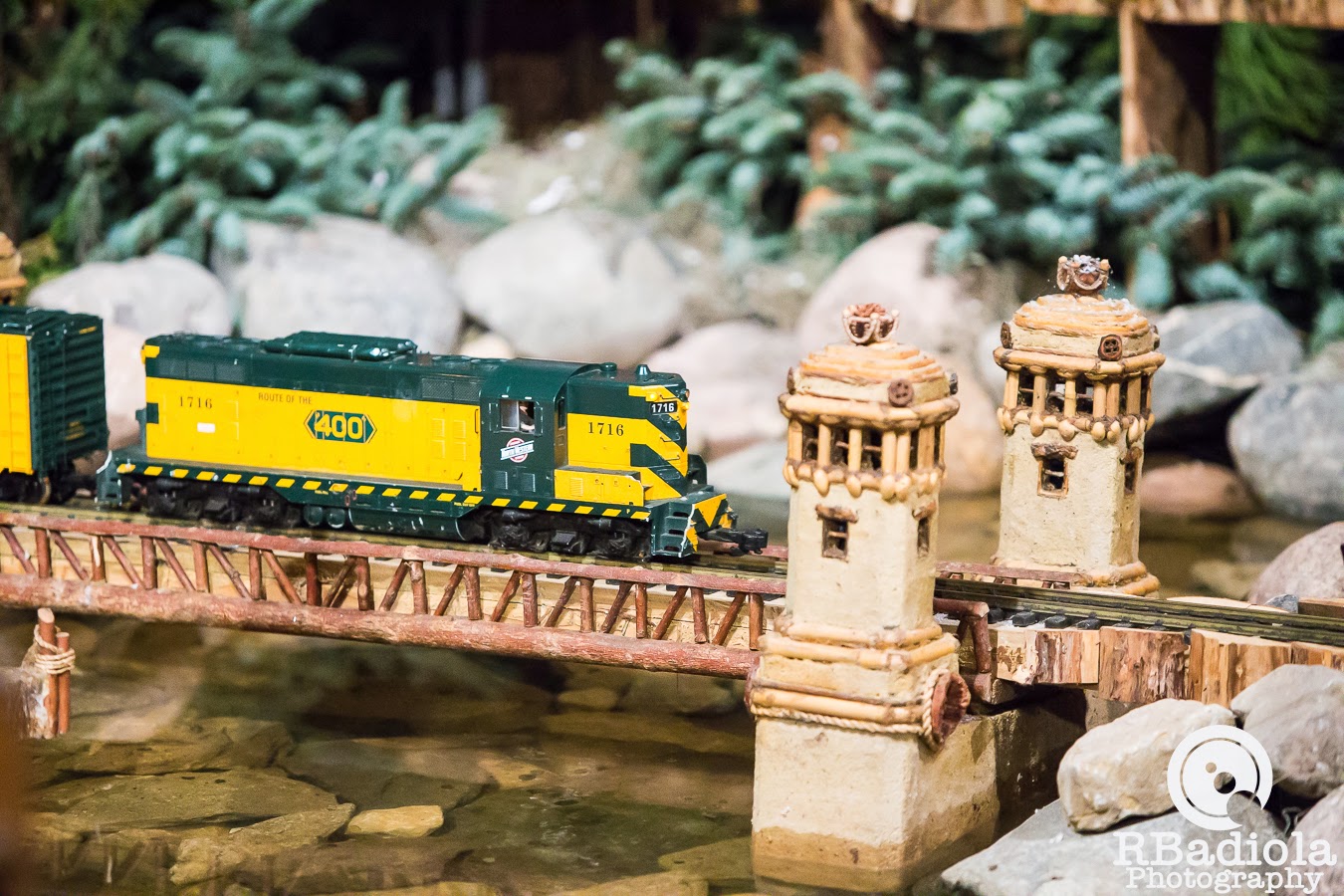 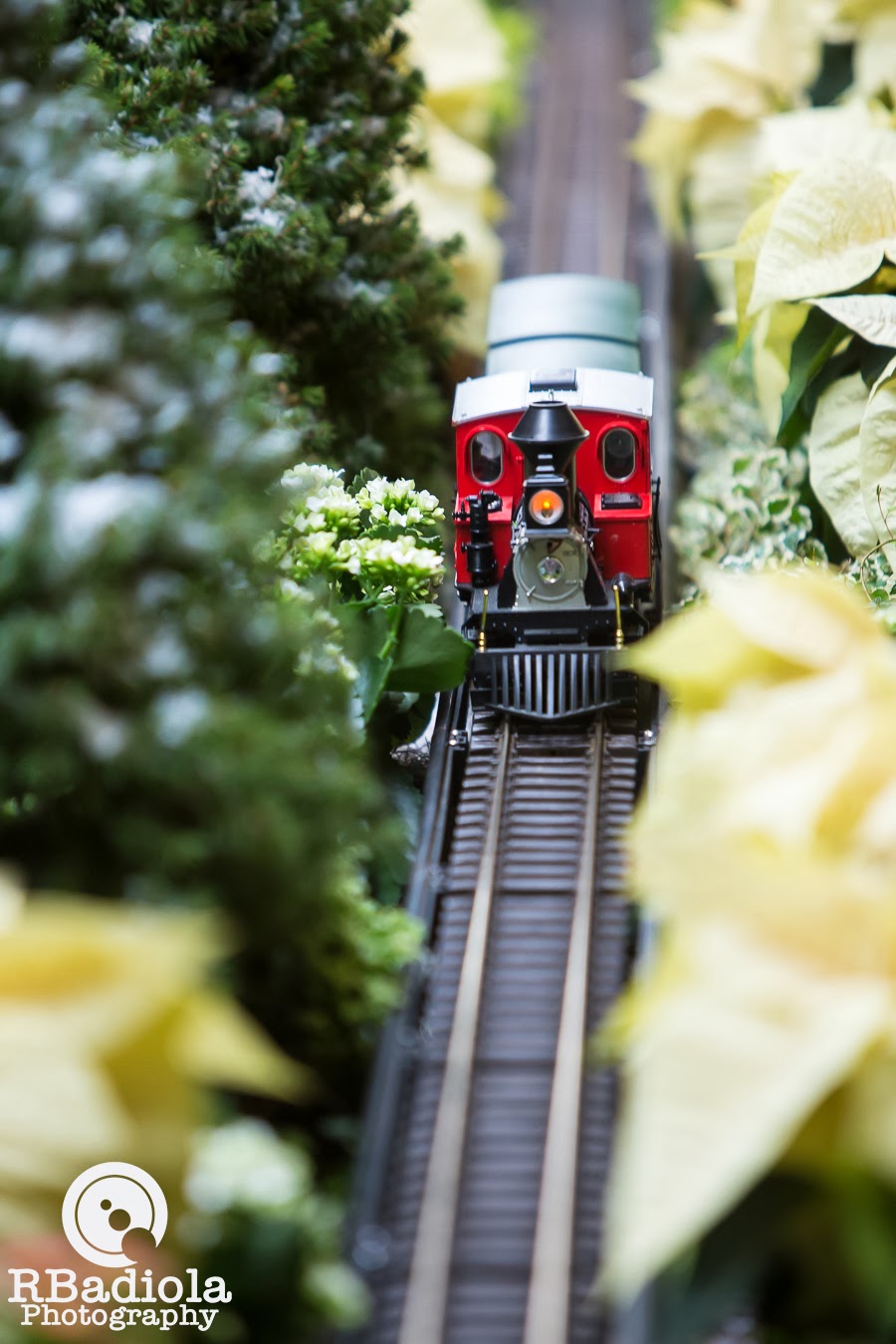 One of my favorite trains is a train that goes around this one big oval that is modeled after the Chicago Botanic Garden/Ravinia area. It has the famous bell tower inside the garden, the Japanese garden, the train stop at Ravina and more. 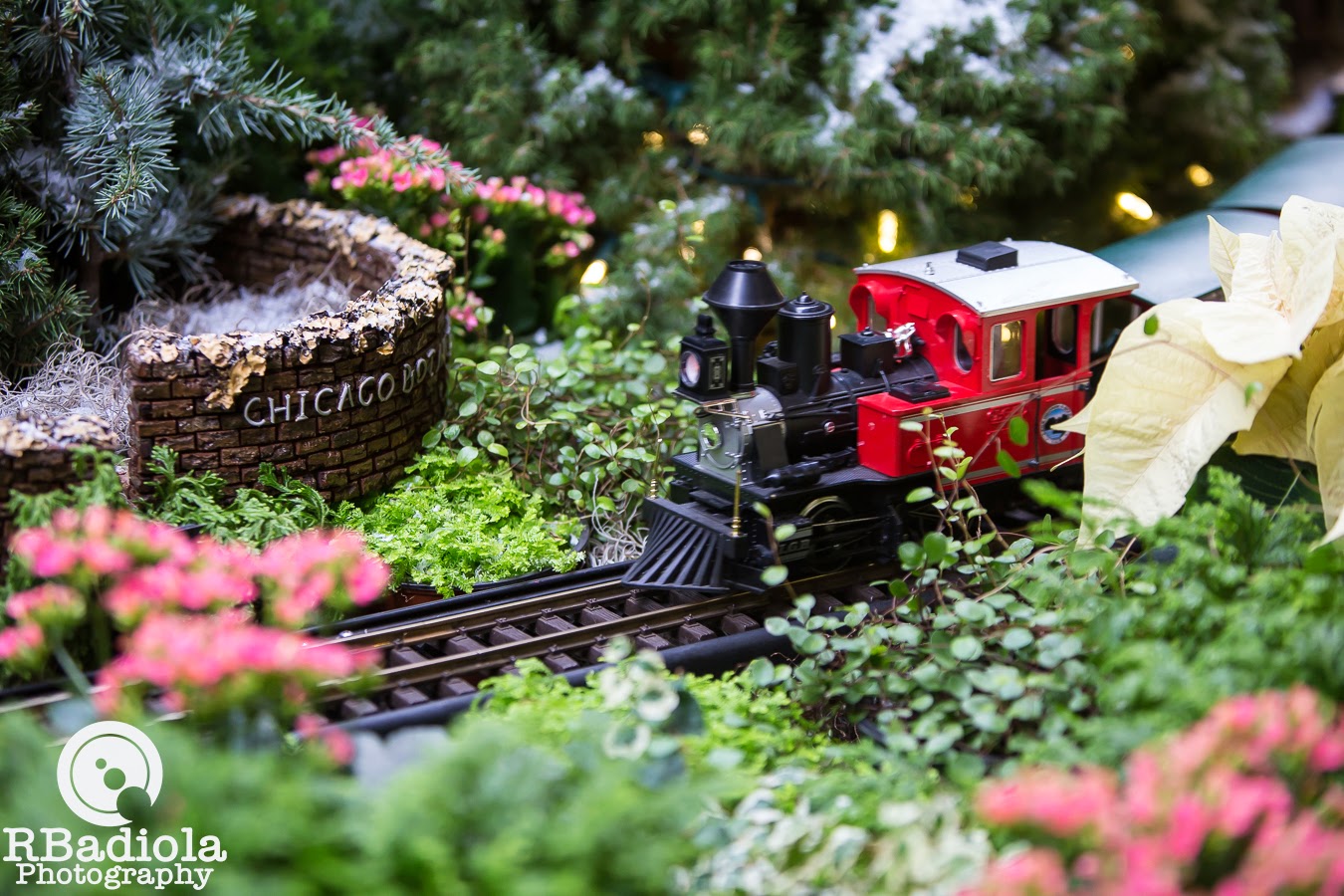 I am kinda sad that the event is now over. Although this year when it comes back in winter, we will probably be the first one to visit the exhibit. This event is excellent for kids and model train aficionados. Heck, it's actually really entertaining for everybody!
Posted by rbadiola at 7:04 PM No comments:

We were once again at beautiful Door County Wisconsin last November. We were curious to what was going on there during winter and we went after thanksgiving.

Thanksgiving I guess was one of the last holidays that you'll be able to see a lot of shops open there. After that, a lot of them close for the season. That didn't discourage us from going around to see what was going on.

One fun event we saw was a game where you'd place a bet on a numbered square and they'd walk a reindeer around. It wasn't really a real reindeer but rather a baby cow. Wherever the baby cow poops, that corresponding square where the poop lands wins a price. Unfortunately the reindeer didn't so the people just did a raffle instead.

Then we wandered around Egg Harbor and it looked like it snowed there the past couple of days and the Egg Harbor Marina was white with snow. I took that opportunity to take some winter shots of the marina which came out pretty nice.

Fish Creek shops were open when we were there and it was nice just to walk around there at night. The town was decorated with lights for the holidays and it was a joy to walk around and take shots. I had brought my Canon 17-40mm f/4 and my Canon 15mm f/2.8 fisheye together with my 6D and 5D MK2 bodies. It's always a joy to take landscape photos with that equipment around.

The holiday decors around fish creek was a joy to photograph. We found a couple of trees that were decorated around town. It was nice to photograph the Noble house during winter. It looked very peaceful with snow around it.


There was really nothing going on in Sister bay that week. there was a craft show that we missed that weekend and that was it. Although Going around their marina is pretty awesome during winter. You can photograph the water covered in ice. Pretty neat with my fisheye lens on.

Then we went to one of our favorite places in Door county, Ephraim Village. It was a joy to walk around the shoreline and take photos of the docks and the empty establishments. It was really kinda odd to see Ephraim Village empty during the winter as it was one of the most busy towns during summer.

Posted by rbadiola at 9:26 PM No comments:

New years day of last year I reviewed the best camera gear I got the year before. That same year I have acquired a lot of photographic equipment from lenses to harnesses to flash modifiers. Last year, I have acquired very few, but the equipment I got last year were equipment that I really needed.

I acquired two good lenses last year. One was my Canon 15mm f/2.8 fisheye lens, and the other one is the Sigma 85mm f/1.4. Before I got the Sigma 85mm I have gotten a Canon 85mm f/1.8, I've used it about 2 times and it was pretty good for what it is. Now that I am doing more weddings I have decided to get something better than the Canon 85mm so I sold it.

I decided to get the Sigma 85mm f/1.4 lens to replace my Canon 85mm. The Sigma was 2/3 stops faster than the Canon 85mm f/1.8. To some people 2/3 of a stop isn't really a lot of difference but when you do weddings it does. Professional photographers will pay hundreds if not thousands of dollars more for a stop or less for their lenses.

The Sigma came in a couple of days later after I purchased it online. I paid around $800 for it which is more than double of what I paid for with my Canon 85mm f/1.8. I was hoping that for the price that I would really see a difference between the 2 lenses. The lens came in a box with a lens hood included. The lens hood actually comes with an adapter for mounting the lens on APS-C bodies. The adapter basically lengthens the hood to shield more light as the 85mm becomes a longer telephoto on a smaller sensor body.

Build quality on this lens is excellent. Sigma has decided not to do a matte finish on this lens like the older EX series lenses. It's not metal like some Canon L lenses but the build is pretty good considering the barrel is made out of plastic. This is a pretty heavy lens just to let you know. Its around 700 grams. Mounted on a dslr, you can see how big the lens is too. I mounted it on my Canon Rebel XT and the lens basically dwarfs the body. Mounted on a Canon 5D MK2, it still looks pretty big but not overwhelming.

The Sigma 85mm f1.4 is equipped with an HSM motor for fast and silent focusing. You can also refocus when your focus is locked on the subject without letting go of the shutter. The manual and auto focus switch is located on the left side of the body for quick access. The focus ring does not move when focusing. The filter size is 77mm which makes it more standard with professional grade lenses such as the majority of the Canon L lenses, so the filters are interchangeable. I find this really useful if you have a collection of L lenses.

I used this lens on a wedding shoot that I did last year and I am pretty surprised at how sharp the lens is. When I shoot weddings I try to avoid shooting wide open when things get crazy. Although most of the samples here were shot at f/1.8 which is 2/3 stops slower than the maximum aperture, the shots came in pretty sharp.

The bokeh quality on this lens is excellent. It does not look busy at all. That is one of the strongest point on this lens. When you can shoot wide open when your lens is sharp, the photo comes out beautiful...and this lens IS SHARP at f/1.4. This lens is meant to be shot wide open...and at f/1.4 it does not disappoint.

Chromatic aberration is visible at 100% when you shoot wide open with this lens. Not a problem if you are shooting RAW as you can eliminate it in post processing. Again, with lenses it's a give and take situation, there really is no perfect lens. This is the reason why I shoot raw 90% of the time.

Focusing speed with this lens is pretty good. The HSM motor is really quiet. The lens tends to hunt in low light. It's not a big deal for me though. It's not really that slow compared to the focusing speed of the Canon 85mm f/1.8 lens, they are about similar. Minimum focusing distance is at around 2.8 feet...this means that this is not to be used as a macro lens.

Color rendition is about neutral. Similar to my other Canon L lenses. Shots are pretty contrasty out of the camera. Better if saturated in post. Compared to my Canon 85, the Sigma is a bit more saturated.

Overall the strongest point of this lens is its sharpness. It is actually sharper than the Canon 85mm f/1.8 at 1.4 than with the Canons 1.8 f-stop setting. It actually reminded me how I felt with the Sigma 70mm macros sharpness when I first got it.

The Sigma 85mm f/1.4 is one of the best lenses I have ever used. I promised myself to stay away from aftermarket lenses when I had problems with my Sigma 18-50 f/2.8 DC years ago. The Sigma 85mm f/1.4 proved me wrong. As I have said...this lens is SHARP. The only gripe I have about it is the minimum focusing distance, but really this lens isn't supposed to be used as a close up lens in the first place.

85mm lenses really are special lenses. I have never used this lens a lot and it usually stays in my bag most of the time. My Canon 50mm has tons more use than my Sigma 85mm, although for weddings and portraits, I would never leave my Sigma 85mm for any other lens that I have. It just does a perfect job for weddings, thus justifying the high price tag. For 2013, this is the best piece of equipment I acquired hands down.  I highly recommend it.