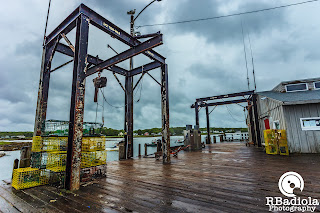 By the dock. It was empty when we arrived.

Our 2nd day in Maine was stormy. After arriving the day before and deciding to just stay indoors the rest of the day, we decided to drive around the area and explore. Weather wasn't cooperating but it really didn't matter. We were determined to take some photos of the area no matter what. So I packed up my camera gear and off we went. I packed my bag with the 5D MK2 and my favorite lens for landscapes...my 17-40mm f/4 L. 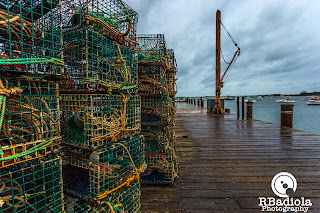 Lobster cages everywhere...Maine isn't called the lobster capital for nothing.

We went to this dock and started taking shots. There was no one there, we weren't sure if it was the weather or if it was something else. That didn't stop up from taking shots around though. It was overcast so I set my camera to aperture priority and set a wide aperture to keep up with a reasonable shutter speed. 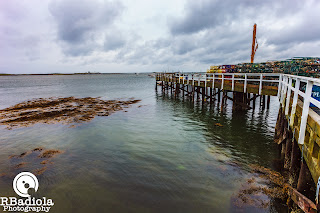 Took this from the top of the dock to get the maximum view of the sky and the sea. 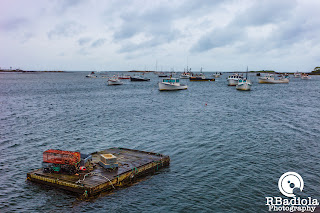 I zoomed in to 40mm to get this shot. It's not as wide as the other ones.

The temperature was around maybe 65 degrees and it was really windy. it was good we bought windbreakers with hoods before we went out. The rain was non stop. The shots show that the sky was really dark. 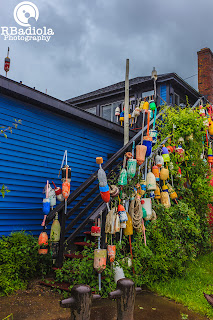 The restaurant at the side of the dock. I guess the sell buoys too. 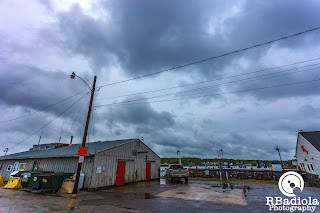 The other side of the dock. That building on the right I think is a restaurant.

After about an hour, we decided to wrap it up as our equipment were drenched in rain. Again, it's the perfect time to be using the weather sealed Canon L lenses. My wife was using a Canon Rebel XT with a 28-135 lens and that did survive the rain too. Although it's not really advisable to use non sealed equipment in the rain but I guess we were lucky.
Posted by rbadiola at 9:24 PM No comments:

Going around a dock in Kennebunkport Maine 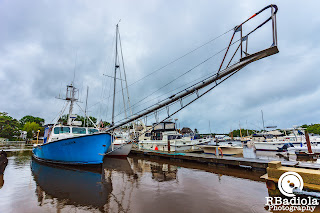 One of my favorite first shots in Maine

So we arrived in Kennebunkport Maine and I have packed more camera equipment than clothes...very typical for photographers. We arrived in our cottage late in the afternoon and then walked around the downtown looking for a place to eat. I then found one of the docks near the restaurant where we had our first Maine dinner.

So I take out my camera, with the 17-40mm attached. and started to take shots. we just went on walking around the dock area looking for some interesting subjects to photograph. The 17-40mm f/4 L when attached to a full frame body gives you excellent point of views if you know how to compose properly. It's also an excellent lens to walk around with in any weather as it is weather sealed. It was raining a bit when I did these shots so the weather sealing was an excellent feature. 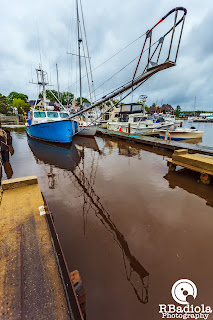 It is the same boat as the one above, although I tried to capture the water reflection too at the bottom. 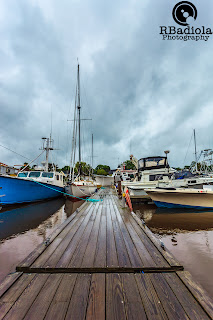 I love taking pictures of docks and bridges because they are actually excellent in giving you nice perspectives.

Maine is an excellent place to capture marine photos. They have docks, boats, wildlife, and everything you can think of when it comes to the sea. I took advantage of that by taking with me wide angle lens, a telephoto and a super telephoto, and boy did I use all of them. 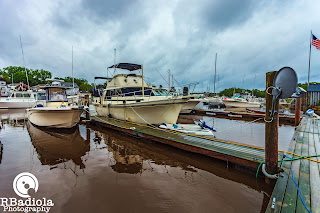 Taken before we headed out for dinner that day. 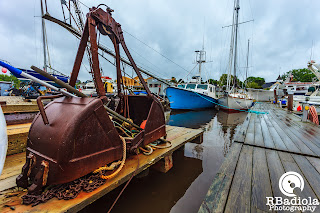 A rusty piece of machinery. Gives the photo a bit of interest.

These are just the first batch of photos that I took. There are many more to come in my upcoming posts!
Posted by rbadiola at 7:30 PM No comments:

What has happened in June 2012

A ton of stuff has happened to me at the beginning of the month.

Anyway, it has been a busy June for me. I had taken around 2800 photos from our last trip. When you go to Maine make sure you pack a ton of disk space like we did, and also a raincoat and a camera rain cover.

I'm in the process of processing all the photos that we took from the wedding and the trip. For now I'll leave you a lovely picture of one pretty scene we saw by the coast when we were on our trip. 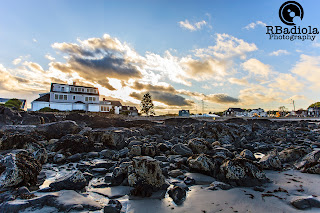 Posted by rbadiola at 8:00 PM No comments: 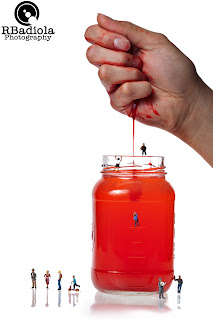