Shooting through a glass window

Winter is here and oftentimes it really is very cold to go out and shoot, especially wildlife. The day I shot these shots, I woke up and looked out my window, and there were a ton of birds eating in our bird feeders outside our house. It is really nice to have a bird feeder especially during winter to keep the birds well fed when food is rare during this cold time of the year.

So I cleaned one of the glass panels near our door with glass cleaner to take dirt and smudges off the glass so I can view the birds clearer through it. I grabbed my Canon 6D and attached my Canon 400mm f/5.6 lens to it so I have enough reach to shoot the birds outside.

I knelt down behind the glass panel and started to view the birds through my viewfinder. With a 400mm attached, I had to back up a bit from the glass panel to properly frame the birds. When I finally got in position I now began to set my settings in the camera.

I set my mode to shutter priority. Birds are fast moving animals so I am going to need a fast shutter speed for these shots. Also considering I'm using a 400mm lens, the faster shutter speed will minimize the camera shake when I take shots. I set my speed to around 400th/sec. I am not moving that much as I was kneeling down behind the glass panel, If I was standing up or moving I would've used a shutter speed that's faster than 400th/ sec. I also set my ISO to 320 which is enough to give me an aperture of around f/5.6 to around f/8...my lens is an f/5.6 lens so I had to put that into consideration. Also since I was shooting in snow I had to bump up my exposure compensation to +1 because snow will affect my metering to underexpose because the camera thinks that I am shooting in bright light. 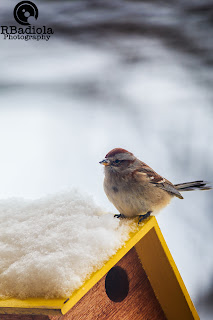 In situations where you need to shoot behind glass, set your focus to MANUAL mode. By doing this you have the control on which to focus on instead of the camera focusing on the glass panel. You have to be quick enough to refocus when your subject moves though. It's hard at first but it's really to get used to.

After a bit of post processing, I saturated the colors a bit and gave the subjects more pop. I was glad to not go out into the cold to capture these shots.

Posted by rbadiola at 9:22 PM No comments:


As a toy collector I was delighted to see that they finally released the Masterpiece Thundercracker Transformer as a ToysRus exclusive. The Takara version of it (Japan version) has become way too expensive for me...around $200 and higher from independent sellers. So when this was released here I snagged a copy right away before the prices go up. 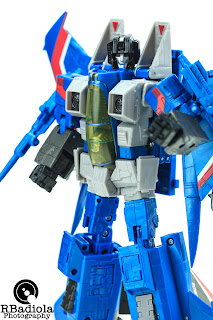 After getting the toy about 4 days later, I set it up in the studio. For studio shots like this, I use the Canon 100mm f/2.8 macro for maximum sharpness. Working in a studio for shots like this, you don't really need a zoom lens since the subject isn't moving at all. Prime lenses are excellent for these kinds of scenarios so primes are my primary choices for product shots like this. I have a small studio so when my 100mm is too close for the subject and I don't have any more room to move, I switch to my 50mm. 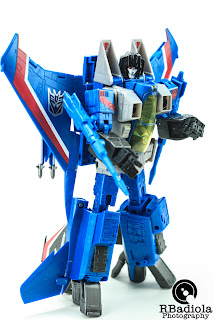 As usual I used 3 strobes for this shot. Two strobes on each side and one on top. I used the strobe on my left side as my main light and the right one for fill. For the fill I usually set the power to half or less of what my main lights power is. The top light is just used to create some shadows to make the subject more three dimensional and not flat. 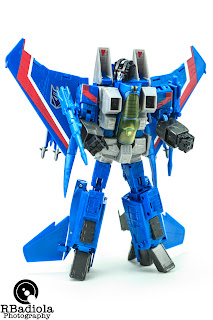 For studio shots like this I usually set my shutter speed to 100th/sec which is enough for static subjects like this. For photographing droplets or something moving, I usually use a higher shutter speed. I adjusted my fstop according to my lighting and ended up somewhere between f/5.6 to f/7.1. My average was around 6.3. With that range I get enough depth of field without me being worried about diffraction, which sets in at narrower fstops. 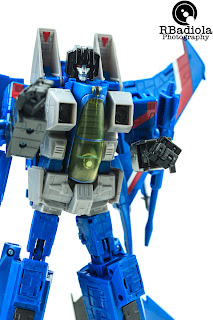 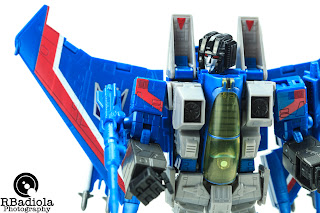 After shooting, post processing always brings out more details. The contours seem to pop more and the colors become more vibrant. Just be careful not to over process as doing that makes the shot look very artificial. 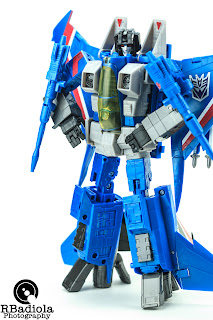 Posted by rbadiola at 7:00 PM No comments: